I won’t lie. I do not enjoy the time leading up to a large International trip. You would think packing would be easy by now, but it’s not. And for some reason, our trip to Nepal and India seemed significantly more difficult from a preparation and packing perspective. This trip is unique from our norm because not only do we have limitations regarding the type of things we can and need to bring, but also requirements around the type of clothing we should wear (only loose fitting pants and tops for women in the village, work clothes and gloves for when doing construction, and lots of layers given the big variance in temperatures during each day). And of course, there are also the supplies we needed to bring (i.e. sleeping bags, solar lanterns, etc. for our time in the village), first aid supplies, a variety of medicines in preparation for any situation (including some seriously strong antibiotics), as well as the gifts that we wanted to bring for our host families in the village.

Above all that, we needed to pack relatively light, with only one large backpack each (no big rolling bags on this trip!) and one carry on. Anyway, just making sure we had everything we needed, getting our shots and prescriptions, preparing our house for a home exchange (yes, there’s another family from Florida staying in our house), plus going through the normal holiday preparation for Christmas (totally snuck up on us this year!) made for a relatively stressful December. I’m exhausted just thinking back on it now!

The night before leaving, Desmond and I admitted to each other that we had both been feeling a little extra anxiety and trepidation about this trip. I suppose it’s because we know this will be the farthest we have ventured outside of our comfort zone as a family. Also, almost every person we have spoken to, who has been to Nepal or India seems to have experienced some type of illness while there (most commonly Delhi Belly, but some with serious bacterial infections). Obviously, that hasn’t helped with giving us piece of mind while preparing and anticipating this trip. Especially being that, while in the Village in Nepal, we will not be staying in a hotel with a western style bathroom. We have been told that there will be no running water and only squat toilettes outside (aka holes in the ground). Again, REALLY hoping no one will get suffer extreme intestinal issues!

One aspect that helped a little was that our our flight was not until late afternoon on the 26th, because we literally needed all day to finish packing (really tried to just enjoy Christmas even and Christmas day) and prep the house for the home exchange. We literally were scrambling until the last moments, trying to sort out how many carry-on bags we could limit ourselves to and get everything ready in time to leave for the Airport.

Of course, we ended up leaving later than planned, and although it seemed we still should have had plenty of time after checking in and grabbing a quick lunch at the airport, we encountered an extremely long security line, probably longer than any other I can remember having in the International terminal (yeah, I know…it’s the day after Christmas!). To make matters worst, the line was just NOT moving. That’s when I started to panic. So I went back to the security people and let them know that our flight was schedule to leave in about 30 minutes and they said all we could do was ask the people in front of us if they would be willing to let us go ahead of them. And as much as I hate the thought of asking people, I did out of desperation. And thank goodness for some kind people, we got closer to the front of the security line. Sadly our gate was literally the farthest one away in the terminal, so we did some running down the terminal ala The Amazing Race, only to get to our gate and see a huge line of people still boarding. 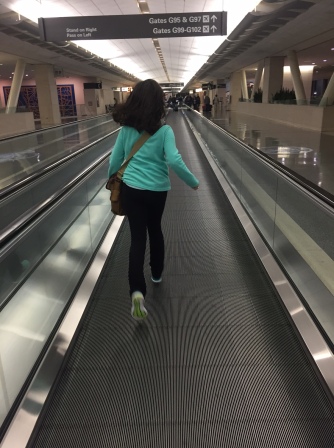 But we finally made it onto the plane. It still felt pretty surreal to think we were headed to Nepal. As Desmond said, it took him a bit off guard when the person checking us in said “your final destination is Nepal?”! And so we finally set off on what is definitely our longest journey as a family, hoping this will be an adventure of a lifetime, giving us all a new perspective on life.

2 thoughts on “Our Longest Journey…”

Arriving in Diokoul For The School Build

We’re About to Embark On Another BuildOn Adventure!

Getting to Kathmandu and departing Nepal

Our Departure from The Village

Our Farewell Ceremony in The Village!

Our Final Day On The Work Site